Aside from a short time in North Carolina between the ages of three and nine, Jack was born and raised in Dallas, Texas. He attended high school at The Episcopal School of Dallas where he discovered his passion for lacrosse. Jack went on to play the game in college at Notre Dame, where he lettered for four years as a division one varsity lacrosse athlete and was named a team captain in his senior year. 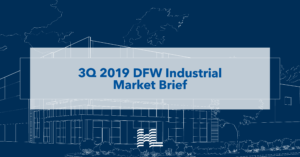 Read about current deals in the market, trends & transactions, and submarkets from our experts! 3Q 2019 DFW Industrial Market Brief click…